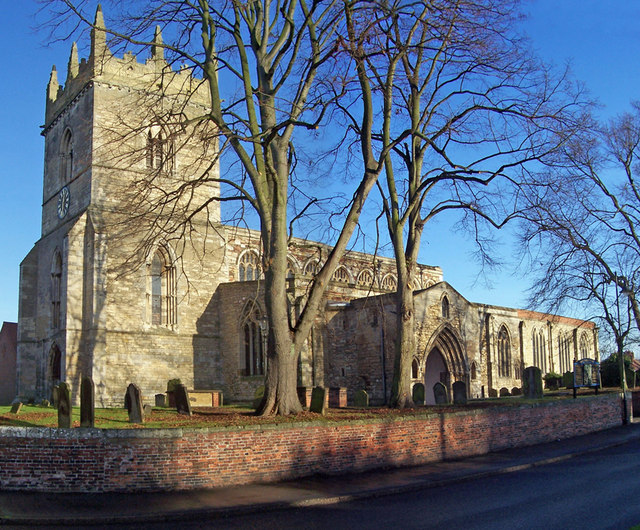 St. Mary’s Church was originally built as a chapel-of-ease to St. Peter’s Church, and the Norman Chapel was began by Gilbert de Gaunt and finished by his son Walter. Described as the Chapel of All Saints, it was again altered in 1248 with the removal of the nave altar, and it was re-dedicated in honour of the Blessed Virgin Mary.

Before the end of the Middle Ages, a churchyard had been enclosed and during the 12th and 13th centuries aisles were added, and the west tower was built. More building work continued during the 14th and 15th centuries resulting in it being along the same scale as its neighbour, St. Peter’s.

St Mary’s has very little stained glass; the east window does contain a composite panel of fragments of medieval glass depicting the Crucifixion, which graced the window prior to the Puritan desecration in 1651. The window was originally erected around 1300, then altered when the clerestory was built. It was then restored in 2001. The current organ in St. Mary’s was built in 1898 and was moved from St. Peter’s church in 1973. St. Mary’s church has eight bells; four of these were cast in 1946, the other four are from the 17th century.

Access to St. Mary’s Church is usually available on most days, as it is a Cascade church in the Lincolnshire Church Tourism Cascade. You can visit it and adjacent churches in the area as part of the Northern Lincolnshire Church Trails scheme. Provision has been made for level access for wheelchairs, baby carriers, Zimmer frames, and spaces are available in the body of the church for wheelchair-using worshippers. An amplifying loop is used at services to facilitate those using hearing aids.