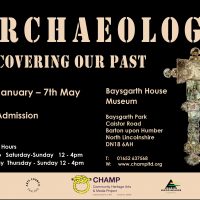 Baysgarth House Museum has launched a new exhibition showcasing the archaeological history of Barton and...

Archaeology: Uncovering Our Past

This free exhibition at Baysgarth House Museum takes visitors on a brief history of...

This Sunday, it will be 120 years since the death of Sir Isaac Pitman,...

The life, times and art of Ted Lewis continues to be celebrated at the...

New App to Reveal the Hidden Histories Behind Barton’s Treasures

Have you ever walked down a street in Barton and wished that you could...

Barton groups and organisations wanting to advertise forthcoming events by placing a banner on...